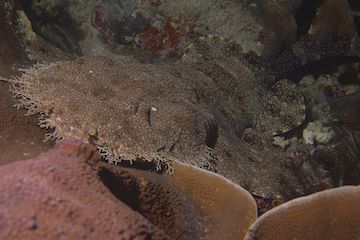 When you walk on a tattered carpet or a stained-up rug, you don’t usually worry about it lunging up and biting you. Unless, that is, you happen to be walking through shallow coastal waters around Indonesia or parts of Australia. In those areas, the carpet just might give you a nasty shock.

These “carpets” are sharks, known as wobbegongs. They have wide, flat bodies. Most of them are colored in shades of brown, speckled with white spots or circles. And they have “tassels” around their heads. In fact, that’s where they got their name -- “wobbegong” is an aboriginal word that means “shaggy beard.” The sharks spend much of their time flattened against the sea floor -- a perfect carpet-like disguise.

There are about a dozen species of wobbegongs. Most of them grow up to a few feet in length. The biggest species tops out at about nine feet. Perhaps the most elaborate-looking species is the tassled wobbegong. The appendages around its head are especially complex. They have multiple branches, so they look like small trees.

Wobbegongs eat bottom dwellers -- lobsters, crabs, some fish, and even other sharks -- including their own kind. Females incubate their eggs inside their own bodies, then give birth to about 20 pups at a time. When they’re born, the kiddos are hungry. They sometimes eat unhatched eggs, or their hatched brothers and sisters. The newborns then tend to scatter quickly -- in part so they don’t get eaten by mom! -- allowing them to “carpet” new patches of the ocean floor.