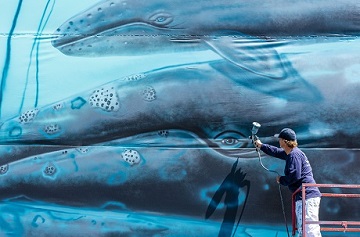 When Robert Wyland was 14 years old, he and his mother traveled from their home in Michigan to Laguna Beach, California. From the water, Wyland saw another mom and child taking a trip: a gray whale and her calf, headed toward Mexico. That inspired a life-long interest in whales, and a decades-long public art project -- the Wyland Whaling Walls.

Wyland moved to Laguna Beach a few years later. There, he painted a mural on the side of a hotel -- “Gray Whale and Calf.” It was dedicated in 1981. The artist decided to do 99 more murals to raise awareness of marine life and the environment.

Many of them show gray whales, but others feature different species of whales, plus dolphins, coral reefs, and other marine life. Many of them were created in coastal cities. But others were painted in Arizona, Utah, and other places that are far from any ocean.

The “canvases” were the walls of apartment buildings, power plants, schools, and airports. The biggest encircled Long Beach Arena -- 1280 feet long and 105 feet high. And the final wall was created in Beijing for the 2008 Olympics.

About a third of the murals are gone or blocked from view. But some have been restored or repainted. In 2019, for example, Wyland restored murals in Detroit and Seattle. And he repainted the original mural in Laguna Beach -- five decades after his encounter with a gray whale and her calf.