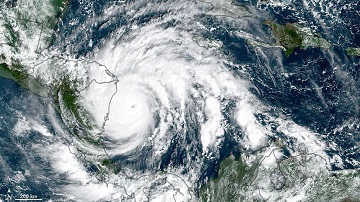 The 2020 hurricane season was a mean one. It produced 30 named storms, which was a new record. Thirteen of the storms became hurricanes, which was tied for the second most on record. A dozen storms hit the United States -- another record. And combined, the storms produced an estimated 37 billion dollars in damages.

Some of the damage occurred far inland, as heavy rains produced massive floods. And according to a recent study, the inland damage could get even worse in the years ahead. That’s because a warmer climate is causing storms to weaken more slowly after they hit land. They come ashore absolutely “soaking” wet, so they produce heavy rains for a lot longer.

Researchers looked at records of tropical storms in the North Atlantic over the last 50 years. They found that in the early 1960s, the storms lost three-quarters of their “punch” in the first 24 hours after coming ashore. Storms in recent years, though, lost only half of their intensity during that first day.

Computer simulations of storms produced a likely reason for the difference: warmer oceans. Warmer water produces more evaporation, which is what powers big tropical storm systems. So when a storm that was born over a warmer ocean hits the shore, it holds a lot more water than the storms of a half-century ago. That provides the “juice” to keep a tropical system going long after it hits land -- putting regions far from the ocean at greater risk of dangerous flooding.