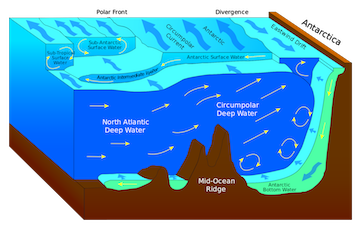 The oceans are like giant storage batteries -- they store heat that’s transferred from the atmosphere. One of the biggest batteries may form a ring outside Antarctica. And a recent study says it’s charging up with more heat than ever -- thanks in part to stronger winds.

Subantarctic Mode Water is found in the Southern Ocean, as well as parts of the Atlantic, Pacific, and Indian oceans.

During winter, strong winds churn up these regions. That causes water at the surface to mix with deeper water, creating a thick layer with about the same temperature and other traits. When winter ends, the surface warms and the Subantarctic Mode Water sinks deeper.

This layer can absorb heat from the atmosphere. As it descends, it traps the heat. And the recent study says it’s trapping more heat than ever.

Researchers in China and Australia looked at observations made by a network of robotic sensors. In particular, they looked at how conditions had changed from 2005 to 2015. They found that the layer grew more than a hundred feet thicker, and that it moved a good bit deeper. Thanks in part to those changes, the heat contained in this layer jumped by about eight percent.

The scientists concluded that the changes were caused by stronger winds over that part of the world.

The winds churned the waters even more, allowing them to absorb more heat. The winds are predicted to get even stronger in the coming years. That could mean that this marine “battery” could store even more heat in the future.