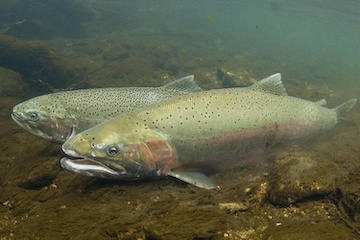 What do you get if you give a young rainbow trout a good travel agent? A steelhead trout. While most rainbow trout spend their entire lives in rivers and streams, some head out to sea. Such travelers are known as steelheads. It’s unclear, though, exactly what causes one trout to stay at home and another to seek the open ocean.

Both forms are types of salmon. They’re found from the northwestern United States across to northeastern Asia. They hatch in fast-flowing waterways with gravel bottoms, where the eggs can be covered up to protect them from predators.

A future steelhead may develop for anywhere from one to five years before it heads out to sea. A recent study found that juveniles matured earlier when lots of pink salmon were around; their eggs and carcasses may provide enough extra food to give the young’uns a boost.

Just what makes a rainbow head for the Pacific Ocean isn’t clear. It probably involves genetics, water temperatures, nutrition, and other factors.

Whatever the reason, when the young fish reaches the ocean it has a lot more to eat, so it grows quickly -- up to an inch per month. Now known as a steelhead, it develops a sleeker profile and a more silvery appearance. After a few years, the steelhead returns to the place where it was hatched to spawn. Its young aren’t steelheads, though -- they’re rainbows.

A steelhead doesn’t necessarily die after it spawns. Many of them return to the ocean -- seeing more of the world while their rainbow cousins stay home.