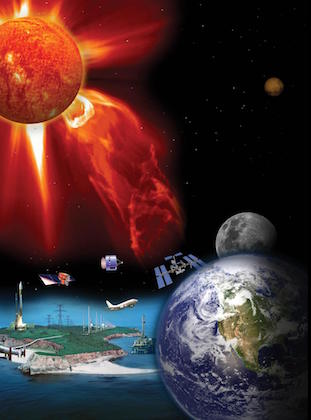 Bad weather can make it hard to navigate. It’s hard to see where you’re going if there’s fog or heavy rain, so you can find yourself off course and in trouble.

For a while, biologists have suspected that bad weather can make it hard for whales and dolphins to navigate, too -- not fog and rain, but space weather. Space weather is caused by magnetic storms on the Sun. Giant eruptions can spray Earth with energy and charged particles. That can disrupt satellites, interfere with radio communications, and knock out power grids.

It’s also possible that these events could interfere with the navigation of some whales and dolphins. These creatures are thought to use subtle variations in Earth’s magnetic field like road maps, helping them find their way. When a solar storm hits Earth, though, it can change the planet’s magnetic field. That could leave some whales and dolphins in a fog, unable to find their way. And that could lead to strandings, when groups of animals wind up stuck on a beach.

The first phase of a recent study, though, found no relation between strandings and space weather. Researchers compared decades of strandings on Cape Cod, where such events are common, to records of solar activity. And they found no correlation between the two. Now, they’re expanding their study to look at strandings from around the world. They’re also looking at other possible causes, from unusual tides to changes in the color of the water -- possible reasons for whales and dolphins to lose their way.