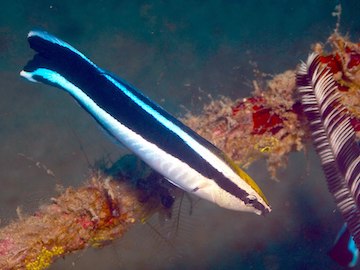 It has recently been discovered that wrasse can recognize themselves in a mirror. Photo Credit: Elias Levy/ Creative Commons Attribution 2.0 Generic

We might not always think so, but people who spend time preening in a mirror are actually passing an intelligence test -- showing an awareness that the thing in the mirror is them. Only a few other species have shown this level of self-awareness, including dolphins and elephants. The most recent addition to the list is a fish that was already known to be pretty smart.

The cleaner wrasse is found on coral reefs from the east coast of Africa to Hawaii. It’s only a few inches long, and it has multiple stripes. It gets its name because it cleans parasites off of other fish. A wrasse typically stakes out a station on the reef, and waits for “clients” to come to it. When a client is ready for a cleaning, it stops and waits for the wrasse to get to work.

The cleaner wrasse was already known as a pretty smart critter. It can recognize many of its clients, and it knows which ones it can “cheat” on by nibbling on their flesh -- it plays things straight with predators, or when other clients are watching.

A recent study added to their reputation. It found that wrasses appeared to identify themselves in mirrors. The test subjects first treated the image in the mirror as a possible competitor. They then performed unusual moves, such as flipping on their backs. Finally, they returned to the mirror often to check themselves out. And when researchers added a dark mark under the skin, they tried to rub it off on nearby rocks. So the fish used the mirror to keep tidy -- just like people.