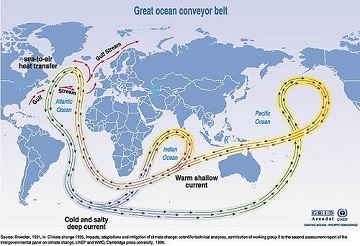 A “conveyor belt” in the Atlantic Ocean appears to be slowing down. And that could have a big impact on the climate, although it’s not clear just what that impact might be.

The conveyor belt is the Atlantic meridional overturning circulation—AMOC for short. Water at the surface travels northward, parallel to the American coastline, then curls over to Europe. As it reaches higher latitudes, the water gets cooler and denser, so the current sinks. It swings around and moves southward, on the opposite side of the Atlantic. Eventually, it’s brought to the surface, where it warms up again.

Scientists have been tracking the AMOC only since 2004. But they can get a rough idea of what happened before then by sampling ocean sediments and making other measurements. And a recent study found that the current has weakened dramatically over the past thousand years—especially since the mid 1900s. That’s probably a result of our warming climate.

Scientists expect the trend to continue. And the AMOC could even shut down entirely. Today, the current helps keep the climate in Europe fairly mild. As it weakens, though, the continent could see more severe winters and bigger storms.

One study says the United States could see more severe winters as well. On the other hand, another study says hurricanes on the Atlantic coast might get weaker. But scientists need to know more before they can tell us just what will happen as this giant conveyor belt slows down.