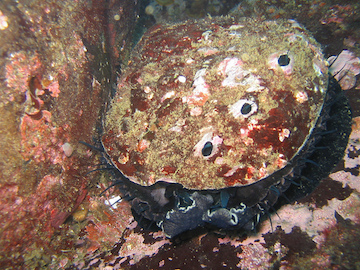 The California white abalone population, once numbered in the millions, has dropped to less than two thousand. Photo Credit: NOAA

At its height, California’s abalone industry brought in millions of pounds of the tasty sea snails. But the heyday didn’t last long. The fleets brought in so many abalone that there weren’t many left. By the late 1970s, the industry had crashed -- and so had the abalone populations.

The population that suffered the most was the white abalone. It’s one of a half-dozen species found along the coast of southern California and Baja California.

White abalone accounted for only a tiny fraction of the total catch. It was considered a delicacy, though, so demand remained high -- and it’s still high today.

Marine biologists estimate that white abalone once numbered in the millions. But a survey a few years ago found the population could have dropped to less than two thousand. What’s worse, the survivors are so thinly spread that it’s almost impossible for them to breed. Without help, the species could become extinct.

Several agencies are trying to rescue the white abalone, though. Hunting grounds have been closed for decades, and the species has been listed as “endangered.”

Today, scientists are keeping an eye on the wild population, and studying its habitat. They’re also developing captive breeding techniques. The lead laboratory for that effort has produced successful spawnings for the last several years. The goal is to introduce hundreds of thousands of abalone to the wild beginning in a few years -- perhaps rescuing this once-plentiful marine delicacy.