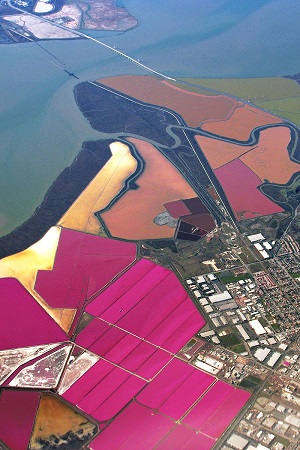 If the Pink Panther is ever looking for a new home, he might pick a small village in southern France. Nearby ponds are filled with pink shrimp, pink flamingoes, and even pink water -- colored by microscopic organisms that thrive in a salty environment.

The ponds are built in a saltmarsh -- spongy ground that acts as a transition zone between land and sea. Tides ebb and flow across these zones, bringing in saltwater.

Despite the saltiness, the marshes are some of the most productive ecosystems on the planet. They’re home to many organisms that have adapted to the salty environment, including grasses, fish, crustaceans, and birds.

Saltmarshes also help protect the coastline. They reduce flooding during storms, filter pollutants from the water, and prevent erosion.

And some are important sources of salt. Water from the high tide is trapped in ponds. Wind and sunlight evaporate the water, leaving salt behind.

The process takes years, though. Waters of different salinity are moved into different ponds. Microscopic organisms adapted to the salty conditions tint the ponds in shades of pink, orange, red, and other colors. The ponds in France, for example, are mostly pink.

There’s a big salt-extraction operation along San Francisco Bay as well. It produces hundreds of thousands of tons of salt every year. But conservation efforts in recent years have reduced the acreage devoted to salt production. The land is being restored to its natural condition -- a lot less pink, and a lot more green.