Rising from the Dead 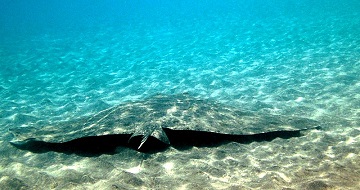 A type of ray has come back from the dead—or at least the mostly dead. The tentacled butterfly ray inhabited the waters along the northern Indian Ocean, from Arabia to India. But it hadn’t been seen since 1986, near Pakistan. So it was listed as critically endangered and possibly extinct.

The tentacled butterfly ray is one of about a dozen species of butterfly rays. The rays can be up to about 12 feet wide. They have long, thin “wings” that make them look like butterflies. They live near the ocean floor, mainly in open, sandy areas, where they eat fish, shellfish, and other bottom dwellers.

In late 2019, researchers found a tentacled butterfly ray in the nets of a trawler off the coast of Iran. The ray had died before it reached the surface. But over the following year, they found 367 more—most of them still alive—in the Gulf of Oman and the Persian Gulf, between Iran and the Arabian Peninsula. In fact, the ray accounted for about 15 percent of all the rays that were trapped in the nets.

That doesn’t mean the rays aren’t still in danger, though. The research showed that they’re easily caught by trawling, and many of them die. Fishing fleets might need to install devices that let the rays and other unintended creatures escape while keeping the target catch inside. That way, the tentacled butterfly ray might still be endangered, but at least it would avoid disappearing once again—only this time, for keeps.