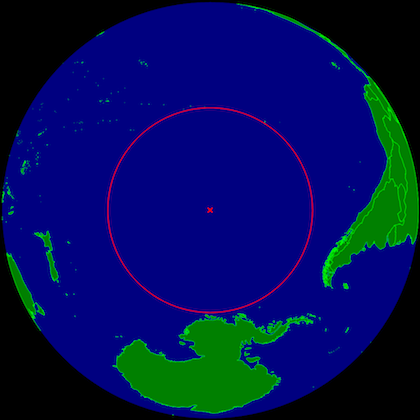 With no other Islands or land within 1700 miles, Point Nemo is used as a dumping ground for dead spacecrafts to keep them from hitting other inhabited areas. Credit: Public Domain

The spot was named after Captain Nemo, from Jules Verne’s classic novel “Twenty Thousand Leagues Under the Sea.” Nemo sought solitude in the ocean depths aboard his submarine, the Nautilus.

Not much lives at Point Nemo. Ocean currents prevent nutrients from coming to the surface, so there’s little to sustain life. And not many ships cross the region, either.

That’s just as well, because the region is a dumping ground for dead spacecraft. To keep them from possibly hitting inhabited regions, space agencies aim them toward the area around Point Nemo. About 260 craft have been targeted there in the last 45 years. Most of a spacecraft burns up as it enters the atmosphere. But some big pieces can survive and hit the ocean. When they sink to the bottom, they may form habitats for bottom-dwelling life -- out in the middle of nowhere.