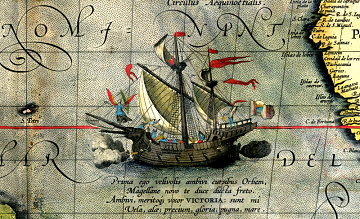 In November of 1520, an expedition led by Ferdinand Magellan headed into an ocean that was a complete mystery to European sailors. It turned out to be far larger than they expected -- and far calmer. It was so calm, in fact, that they called it the Pacific -- a name that means “peaceful.”

Magellan’s expedition was backed by the king of Spain. It was looking for a new route to the Spice Islands -- part of modern-day Indonesia, in the western Pacific. Previous journeys to the islands went around the tip of Africa and across the Indian Ocean.

Magellan and his crew sailed to the Atlantic coast of South America, then searched for a passage across the continent. After months of looking, they finally found one. It’s a narrow, 350-mile-long channel that separates the South American mainland from its southern tip. Today, that passage is known as the Straits of Magellan.

When the expedition reached the Pacific, the men had no idea they were entering the world’s largest ocean -- one that holds more than half of all the water on Earth. Instead, they thought they were just days away from the Spice Islands. But it took months to reach them. And Magellan himself never arrived at all. He was killed during a skirmish with a local tribe in the Philippines.

Only one of the expedition’s five ships -- the Victoria -- completed the trip. And it was carrying fewer than 20 of the 270 original crew members. They were the first people to circle the entire world -- 500 years ago.