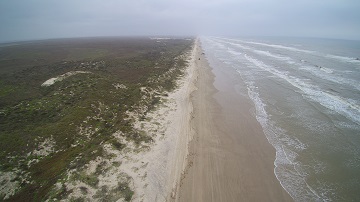 Padre Island is perhaps best known for its visitors: spring breakers in March and April, endangered sea turtles during summer, and migrating birds in the winter. And there’s plenty of room for them, because Padre is the longest barrier island in the world.

Barrier islands form as waves and currents drive sand from the ocean floor toward land. Eventually, enough sand piles up to rise above the water. Such islands protect the coastline from tropical storms and other threats.

Most barrier islands are long and skinny -- including Padre Island. It stretches 113 miles along the Texas coast, from Corpus Christi to near the Rio Grande River. At its widest, though, it’s only about three miles across. It separates the Gulf of Mexico from Laguna Madre, a super-salty lagoon.

Padre Island probably rose above the water at least 3,000 years ago. Today, its dunes reach heights of 25 feet or more. Plants have taken root on many of the dunes, holding them in place.

The middle portion of the island is a national seashore, which protects both the island and its life -- native and visitors alike. The list of creatures includes about 60 species of butterflies, about 400 species of both birds and plants -- and five species of sea turtles.

The endangered Kemp’s ridley is the most famous sea turtle. Dozens of females have been brought to the island to nest. The nests and hatchlings are protected until the youngsters can head out to sea -- hopefully to visit Padre Island once again in the years ahead.