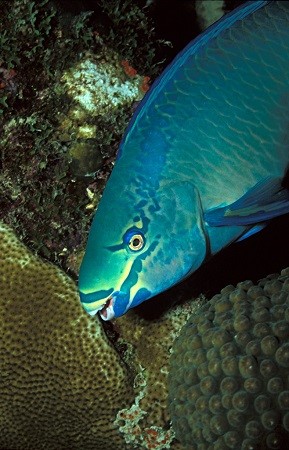 Parrotfish eat other fishs' poo in addition to the algae growing on coral they are well known for eating. Credit: laszlo-photo, CC BY 2.0.

Parrotfish and surgeonfish are among the many colorful residents of Caribbean coral reefs. They mainly eat algae and a type of bacteria off the reef. But they also nibble on other things, including sponges and the living coral. And one item that may be an important part of their diet is decidedly unappetizing: the poo of other fish.

Researchers studied these fish in the waters around an island near Venezuela, in 2019. They followed nine species of parrotfish and three species of surgeonfish. And they paid careful attention to what the fish ate.

They found that one food source was the poo from a smaller fish. Known as Brown Chromis, the fish eats organisms known as plankton near the surface. It then poops out small pellets, which drift toward the bottom. The researchers followed the pellets and found that about 85 percent of them were gobbled up on the way down.

Parrotfish and surgeonfish consumed almost all of these pellets. There were differences between individual species, but most species ate at least some of the pellets.

The scientists grabbed some of the pellets as well. Their analysis showed that the poo was highly nutritious. It contained lots of proteins and carbohydrates, plus important nutrients such as iron and phosphorous. So the fish poo may act as a fish “multi-vitamin.”

Coral reefs offer limited nutrients, but this study suggests that fish eating the poo of other fish may be an important way to recycle nutrients on the reefs.