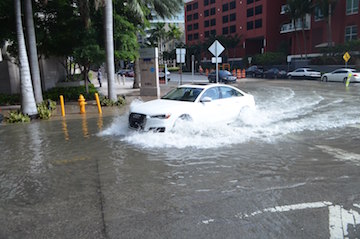 You don’t need hurricanes, tropical storms, or nor’easters to get coastal flooding. It can happen in the middle of a sunny day, with not a storm cloud in sight.

These are known as “nuisance” floods. They occur around high tide, when the local sea level is at its highest. They don’t cause major damage, but they can make life inconvenient. They can cover roads, fill basements, kill lawns, and overwhelm storm drains. That costs time and money. And they’re becoming more common across almost the entire American coastline, especially the east.

The increase has a couple of causes. One is the rise in global sea level caused by our warming climate. Melting ice sheets in places like Greenland add more water to the oceans. And the oceans are heating up, causing the water to expand.

The other cause is a drop in the elevation of the land. When people pump out ground water faster than it can be replenished, the land subsides. And the water in lakes pushes down on the ground below.

The combination has been dramatic. In Annapolis, Maryland, the number of annual nuisance floods jumped by 925 percent from 1963 to 2013 -- from about four to almost 40. In Philadelphia, the number jumped by 650 percent, and in Washington, D.C., by 375 percent. The problem isn’t as dramatic on the Pacific coast, but it’s getting worse there, too.

And where there’s nuisance flooding, there’s likely to be major flooding as well, from hurricanes and other storms -- all thanks to our planet’s changing climate.