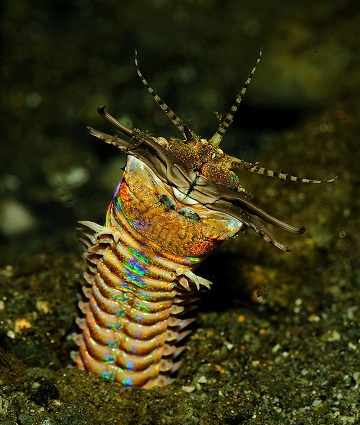 The sand striker is like something out of a nightmare. The worm hides in the sediments on the sea floor, then lunges out to grab a passing fish or crustacean. It clamps its jaws together so fiercely that it can snap the prey in two. It’s even been known to inflict nasty bites on people.

Sand strikers are most common in and around the Atlantic Ocean. But they’re also found in warm waters elsewhere. They typically live in areas with sandy or muddy bottoms. That allows them to dig burrows. During the day, they crouch inside the burrow, sometimes almost completely covered up. At night, they extend part-way out of the burrow.

Antennae around the mouth and jaws wave in the currents, perhaps acting as lures. When a possible meal swims by, the worm strikes, grabs the prey, and pulls it into the burrow -- all in a fraction of a second.

The sand striker’s powerful jaws not only grab prey, but they also inject a toxin. That both stuns the prey and makes it easier to digest.

Most sand strikers are no more than a few feet long -- and some are as little as a few inches. The largest yet found, in Japan, was almost 10 feet long.

Some potential prey have found a way to fight back, though. A small fish in Indonesia can gang up to fire jets of water at the sand striker. That forces the worm deeper into its burrow. It also may mark the burrow as a “no-go” zone for other fish -- helping them avoid a nightmare ending at the bottom of the sea.