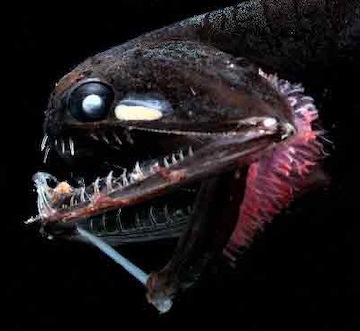 The flashlight fish has a patch below its eye that emits blue light. Photo Credit: Public Domain

For the flashlight fish, school doesn't end at night. In fact, the schooling is just getting started. The fish is one of the few known to congregate in schools at night, even when there's no moonlight. That's because the flashlight fish brings its own lights, so all the members of the group can keep an eye on each other.

The flashlight fish is found at depths of up to a few hundred feet in the tropical Atlantic, Pacific, and Indian oceans. It has a patch below each eye that emits blue light. It's one of the few species of light-producing fish that doesn't live in the deep ocean.

The light's produced by bacteria that live in tubes behind the eye. The fish can turn the light off and on by "blinking."

In 2013 and 2016, researchers studied flashlight fish in the Solomon Islands, to the northeast of Australia. As the Sun set on moonless nights, the fish moved from a cave to a reef system to feed. Scientists went diving with the fish, and tracked them with high-tech video cameras. They then used computers to model how the fish were behaving.

They found that the fish blinked a lot, providing many flashes of light. That allowed the fish to stay together in a school -- a tight grouping in which the fish move together. The school could be led by just one or two individuals.

"Schooling" provides a lot of advantages -- better access to food, protection from predators, and a wider choice of mates. Sticking together at night could be especially helpful -- a big advantage for nighttime schooling.