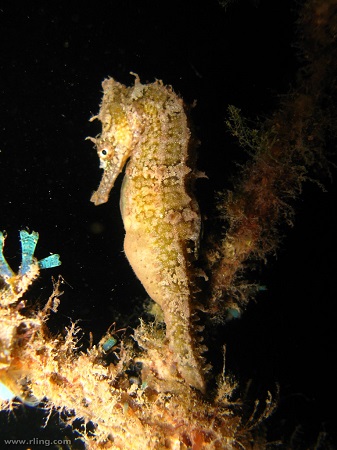 White's seahorses are being bred in captivity and released into the wild in Australia. Credit: Richard Ling, CC BY-NC-ND 2.0

The White’s seahorse could be forgiven for feeling unwelcome. The seahorse is found mainly along the eastern coast of Australia. In the last couple of decades, though, its population has dropped by 90 percent. The main cause is a loss of habitat, but the seahorse has also been hurt by storms.

Researchers are trying to roll out a sort of welcome mat, though. They’re setting up “hotels” on the ocean floor that could become new seahorse habitats.

The White’s seahorse is a few inches long. It lives in warm, shallow coastal waters. Like most seahorses, it doesn’t swim very well. Instead, it anchors itself to something fairly solid—a piece of coral, a blade of seagrass, or a net that keeps sharks away from people, for example.

But coastal development has destroyed a good bit of the seahorse’s natural habitat. And storms a decade ago aggravated the problem, covering a lot of habitat in sand. So in late 2020, White’s seahorse was declared an endangered species.

Scientists from an aquarium in Sydney began raising seahorses in captivity to replenish the population. And working with government and universities, they’ve released more than 200 seahorses into the wild.

They’ve given them some new homes—small wire cages called “hotels.” Over time, corals, sponges, algae, and other life should colonize the cages. The metal will rust away, leaving natural habitats for the endangered White’s seahorse—perhaps helping it recover from an underwater housing crisis.