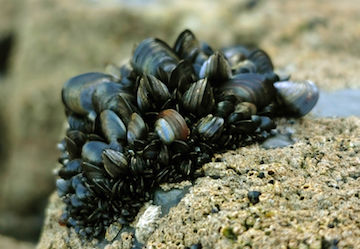 Blue mussels are riding the winds across the North Sea. They’re not taking up wind surfing, though. Instead, they’re colonizing the bases of offshore wind turbines. Over the next couple of decades, that could boost the mussel population, with ripple effects throughout the ecosystem.

The North Sea is between Great Britain and northern Europe. Winds there are strong and steady, making it an ideal location for wind farms. At the end of 2017, in fact, it was home to about 70 percent of Europe’s offshore wind capacity. And thousands more turbines are scheduled to be installed there.

The mussels will filter microscopic organisms from the water. That will leave less food for some fish and other critters. And the effects could extend hundreds of miles from the wind farms -- long-ranging changes powered by the wind.