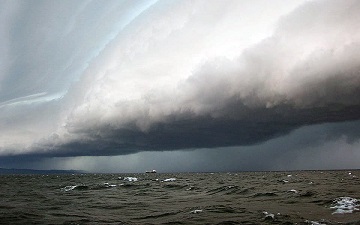 Storm clouds over Lake Superior. When conditions are right, meteotsunamis can form in the Great Lakes. Credit: NOAA.

If you live along the coast, you might get hit by several tsunamis a year -- but not even know it. They aren’t generated by underwater earthquakes, volcanoes, or landslides. Instead, they’re caused by the weather. So they’re called meteorological tsunamis -- meteotsunamis, for short. And they may be pretty common.

A meteotsunami stirs to life when a tropical storm, a nor’easter, a thunderstorm, or some other major weather event roars across the water. The storm causes a big but quick change in air pressure and winds. That can create a wave on the water. The wave is small at first -- maybe an inch or two high. As it moves toward the coast, though, it reaches shallower waters. That causes the wave to pile up. Eventually, it can reach several feet in height -- big enough to cause damage.

In the United States, meteotsunamis are most common along the Atlantic and Gulf coasts, and in the Great Lakes. A recent study, in fact, found that about two dozen of them strike the Atlantic Coast every year.

Most of them aren’t that big, so no one really notices them. But a few can be nasty. The largest ever recorded was a 20-foot wave that hit Croatia, causing extensive damage to boats and port facilities. In the United States, one with 12-foot waves hit Boothbay Harbor in Maine in 2008, causing the harbor to empty and refill three times in just 15 minutes. And in 1954, a 10-footer hit Chicago, killing seven people who were washed into Lake Michigan -- a deadly wave powered by the weather.