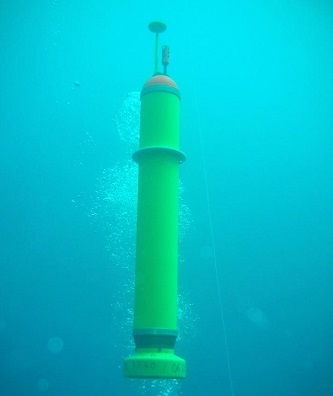 A MERMAID rising to the surface after it has recorded an earthquake wave. Credit: Y. Hello, Geoazur

Dozens of mermaids MERMAIDS drift with the currents of the South Pacific. They listen for the rumble of earthquakes on the ocean floor. Then they pop to the surface to tell seismologists what they’ve heard.

Seismologists record earthquakes to learn what’s happening below Earth’s surface. Sound waves bounce around inside the planet. Recording those waves from many locations allows the scientists to map what’s below the surface.

There aren’t many recording stations on the ocean floor, though. But there’s a lot of activity below the oceans. The plates that make up Earth’s crust move apart there, and new crust forms as molten rock bubbles up from below.

MERMAIDS were designed to provide a fairly cheap way to monitor ocean earthquakes. Each probe drifts a mile or more below the surface. A microphone listens for quakes. When it hears a possible quake, it rises to the surface and beams its readings to scientists via satellite. MERMAIDS also record water temperatures, and using GPS to track their position allows scientists to trace the currents.

In one early experiment, MERMAIDS monitored the waters around the Galapagos Islands for two years. Their observations revealed a giant mass of hot rock pushing upward from deep in the mantle.

Today, about 60 MERMAIDS are operating in the southern Pacific Ocean -- listening for rumbles below the sea.