Jellybeans on a Reef 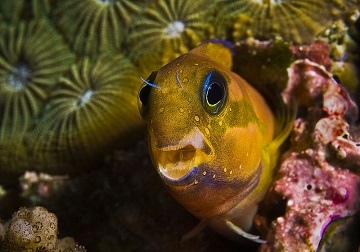 The smallest fish on coral reefs appear to have two main jobs. One is to make more fish. And the other is to get eaten.
These little guys are known as cryptobenthic reef fishes. “Crypto” indicates that they’re mostly hidden, and “benthic” means they stay close to the ocean floor. Most are no more than half an inch long. They include thousands of species across many families. And because they’re so tiny and colorful, they’re sometimes called the Skittles or jellybeans of the reef.

Marine biologists have been paying attention to these fish in recent decades. They’ve found that there are lots of them. They may account for half of the total number of fish on a reef. And they don’t go far. Adults seldom range more than a couple of feet. And even the larvae, which in most species can travel hundreds of miles through the ocean, appear to stay within a few miles of their home reef.

Cryptobenthic fish live in tiny nooks and crannies in the reefs. Some of them avoid getting eaten by mimicking other organisms, or by producing chemicals that keep the predators away. Even so, the fish are a major food source: They may account for more than 50 percent of the total mass of all fish eaten on a reef. That makes them a vital link in the food chain.

Like most other reef organisms, they face some big problems: loss of habitat, climate change, pollution, and invasive species, among others. Their loss could leave the bigger organisms on a reef feeling a lot hungrier.