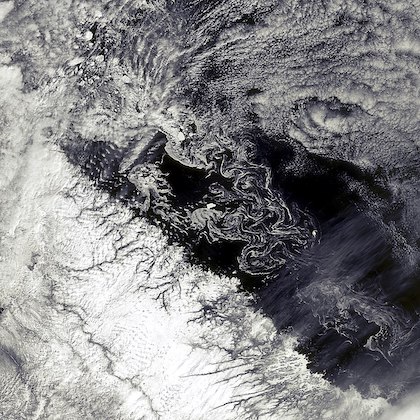 There’s an old saying that if life gives you lemons, make lemonade. Some folks in northeastern Canada are following that advice -- with a twist. When life gives them icebergs, they’re making vodka -- and selling excursions to the bergs to eager tourists.

The businesses are taking off along “iceberg alley.” That’s a stretch of ocean from Greenland to Labrador and Newfoundland. Big chunks of ice break off glaciers in Greenland and follow the current down to Canada.

A thousand glaciers or more can cruise through this narrow region each year, which make it hazardous for shipping. Thanks to an extensive tracking and reporting program, though, there haven’t been any major collisions in decades.

Instead, the glaciers have become a resource. Scientists study them to learn more about Earth’s changing climate. The numbers and sizes of icebergs, the timing of their appearances, and other details can help scientists predict the changes taking place in Greenland’s glaciers.

Businesspeople are interested in the icebergs, too. The iceberg season, which begins in early spring, brings in thousands of tourists. They can approach the bergs in kayaks or larger boats, or fly over them in helicopters.

And a few entrepreneurs are using the icebergs themselves. They harvest small bergs, known as “bergy bits.” They use the ice to make vodka, wine, beer, and other beverages. And some melt the ice and bottle it, creating some of the most expensive bottled water on the planet -- harvested from iceberg alley.