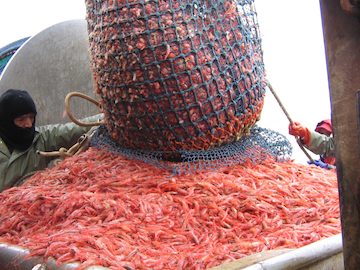 Across the globe, the average person eats an estimated 50 pounds of seafood a year. Photo Credit: NOAA

We Americans love our shrimp, salmon, and canned tuna -- we eat more of those than any other type of seafood. Overall, in 2017 we consumed about 16 pounds of fish and shellfish per person -- just below the all-time high.

But the rest of the world appears to like seafood even more. Around the globe, the average person eats about 50 pounds of seafood per year. And demand just keeps going up. Rising incomes, better supply chains, reduced waste, and other factors have made it easier for more people to get seafood. Since 1961, in fact, the worldwide rate of seafood consumption has grown twice as fast as the population. To meet that demand, in 2016 the world’s fishing fleets brought in about a hundred million tons of fish and shellfish.

But the oceans aren’t providing all that bounty on their own. Wild seafood catches have stayed at about the same level for the last three decades. And maintaining that supply is getting harder -- about a third of all wild seafood stocks are being used up faster than nature can replace them.

So people are filling the gap through aquaculture -- growing fish and shellfish in pens and other facilities. In 2016, in fact, aquaculture provided about half of all the world’s seafood. And the percentage keeps going up -- especially in Africa and Asia.

In the United States, aquaculture represents a smaller slice of the seafood business. Even so, it accounts for about a fifth of domestic production -- millions of tons of food for a seafood-hungry population.