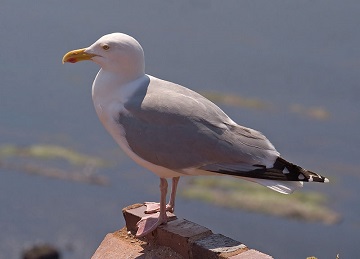 Sea gulls may prefer food that has been handled by humans. Credit: Kulac, Wikipedia

People who picnic on the beach sometimes face a greedy pest: a seagull. Gulls grab the food around people -- and have even been known to take it right out of an eater’s hands. And some recent research says that’s no coincidence -- the gulls appear to prefer food that’s been handled by humans.

Scientists at Exeter University checked out the preferences of herring gulls on the southwestern coast of England. They offered the gulls a choice of two Ma Baker’s blueberry bars, which are wrapped in bright blue packaging.

A researcher dropped two buckets close to the gulls, then removed the buckets, revealing the food bars underneath. The scientist picked up one of the bars and handled it for 20 seconds, then put it down and backed away. Of the gulls that approached the food, about 80 percent chose the bar that had been handled.

A few months later, the scientists ran a second experiment. They offered bits of sponge that looked like the blueberry bars. But the birds showed a much weaker preference for the handled objects.

That suggests that the gulls are pretty smart. They can tell the difference between food and trash from a good distance. And they can tell that the stuff that’s been handled by people is more likely to be food. That helps them colonize areas near people.

If you want to keep gulls away, though, you might rely on an earlier study by the same group. Staring at a gull was more likely to keep it away -- adding 21 seconds to the time it took to start pecking at a picnic.