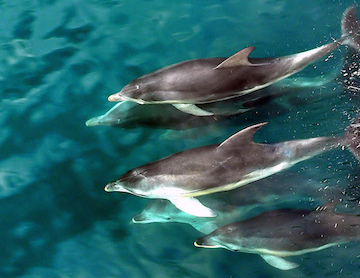 In Laguna, Brazil, there is a group of bottlenose dolphins working with fisherman to hunt and catch fish more effectively. Photo Credit: Bernard Spragg

Some of the bottlenose dolphins near the town of Laguna, Brazil, seem to have a pretty good thing going. The dolphins herd schools of fish toward spots along the shore. At a signal from the dolphins, fishermen drop their nets into the water. The people trap some of the fish in their nets, while the dolphins get the rest. It’s one of a handful of known examples of humans and wild dolphins working together.

The dolphins and fishermen of Laguna have been working together for more than a century. And a recent study confirmed what the locals have known all along: it’s the same dolphins that bring in the bounty.

More than 50 dolphins live in the large lagoon near the town. But researchers found that only about 20 of them work with people. The rest forage throughout the lagoon, spending more time and energy gathering dinner.

The number of “cooperative” dolphins stays about the same. When one leaves the group, another moves in. Mothers appear to pass the skill along to their calves. Some of the dolphins stick to the best fishing spots, while others move around, hitting several sites.

As the dolphins get near the shore, they slap their tails on the water or give other signals to their human partners to drop their nets. Researchers suggest that when the nets hit the water, the schools of fish break up. That may disorient the fish, making the ones that escape the nets easy prey for the dolphins. So the people and dolphins don’t get to share many tall tales about “the one that got away.”