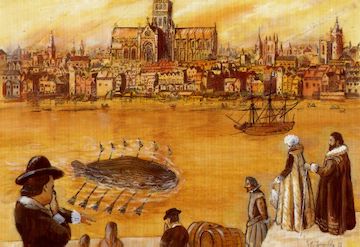 Hundreds of submarines glide through the world’s oceans. Most of them are military, but some sail for science. They measure temperatures and currents, sample the water, map the sea floor, and perform other tasks -- revealing the secrets of the oceans.

The first submarine dropped below the waves 400 years ago, in 1620. It was designed by Cornelis Drebbel, a Dutch inventor. Drebbel was born in 1572. By the early 17th century, he’d made a name for himself in European science and engineering. He invented a glass-grinding machine and used it to make lenses for microscopes and other instruments. He built one of the first thermostats, which he used to maintain steady temperatures in an incubator for chicken eggs. And he was a first-rate chemist.

King James I invited Drebbel to England, and that’s where he did his work with submarines. None of Drebbel’s records survive. But accounts by others say he made his subs out of rowboats covered with watertight leather. Oars stuck out through watertight seals. Bladders were filled with water to allow a sub to descend; to surface, the water was squeezed out. Snorkel-like tubes brought in fresh air.

Drebbel built three submarines in all. They were tested by the Royal Navy in the Thames River in London. In one test, the sub stayed under for three hours, at a depth of about 15 feet. Thousands of spectators watched the tests, including King James. The king even went along for a ride -- one of the first passengers on a submarine.