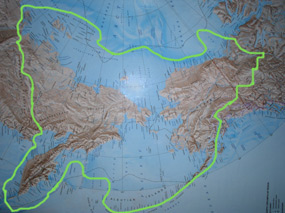 An outline of where Beringia, the “bridge” of land between Asia and Alaska, would be in modern day. Photo Credit: U.S. National Park Service

You’ll find lots of hiking trails along the western coast of the United States. But archaeologists are looking for one more. It might have been hidden for thousands of years -- on the bottom of the Pacific Ocean.

There’s evidence that the first people reached the Americas perhaps 15,000 years ago or even earlier. They came during the last Ice Age, when sea level was hundreds of feet lower than it is today. That exposed a “bridge” of land between present-day Asia and Alaska. People might have crossed that bridge in search of game or other necessities.

Archaeologists are trying to figure out how those people spread across North America. One idea is that they first followed the coastline, which extended farther out than it does today. As the Ice Age ended and the ice melted, though, the Pacific rose, covering any encampments on the coast.

Researchers are looking for evidence of those settlements off the coast of Oregon, and around the Channel Islands, near Los Angeles. They’ve used sonar and other instruments to study the ocean floor and the top layers of sediments. The instruments could reveal piles of discarded shells or other trash, or perhaps even structures.

In 2017, the researchers identified eight places of interest. And in 2018, they took core samples at those spots -- narrow tubes that pushed deep into the sediments. Researchers will hunt through the samples for bits of charcoal or other evidence of human occupation -- stopping points on the trail of the first Americans.