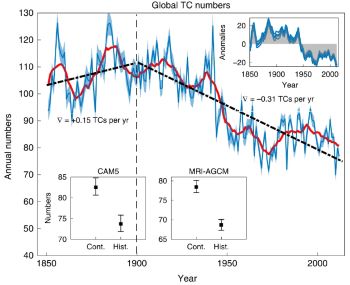 The frequency of hurricanes has decreased over the last 100 years, possibly due to increasing global temperatures disrupting ocean circulation patterns. Credit: Chand et al. 2022, CC by 4.0.

Earth’s warming climate is likely to have big impacts on tropical cyclones—the generic term for hurricanes and other big tropical storm systems. Studies have shown that the proportion of powerful storms may be increasing, and that storms appear to be dumping a lot more rain on land. On the other hand, a recent study suggests that the number of storms is going down.

Scientists analyzed storm records beginning in 1850. That’s not an easy task. Records before satellites began tracking storms from beginning to end are spotty. And separating the effects of human-caused changes from natural climate changes is tough as well.

The researchers compared records from two periods—1850 to 1900, and 1901 to 2010. The first period covers an era before human-caused climate change was much of a factor. The second covers the period of rapid growth in carbon-dioxide-producing industries.

Across the entire planet, the annual number of tropical cyclones dropped by about 13 percent. In the northern hemisphere, the drop was about 16 percent. And in the North Atlantic basin, which includes the Gulf of Mexico and the Caribbean Sea, the drop was 28 percent.

The warming climate changes winds and humidity in the atmosphere. It may also change ocean currents. That combination appears to make conditions less favorable for tropical cyclone formation. That could mean that, while some hurricanes will be more severe, we’ll see fewer of them in the decades ahead.