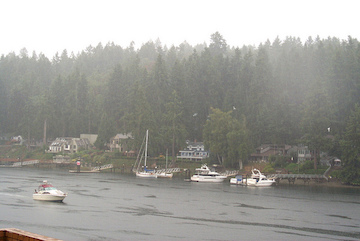 Through Earth’ s water cycle, about 10 percent of ocean water eventually falls back on land as rain. Photo Credit: NOAA

Even if you’ve never seen an ocean, you’ve probably felt one -- in the form of rain. A good bit of the rain that falls over land comes from the oceans. Eventually, some of that water makes its way back to the oceans, beginning the cycle all over again.

Earth’s water cycle is complicated. Sun-warmed water evaporates from the oceans and lakes. Plants “breathe out” water vapor as well. The water vapor then rises into the sky, where it condenses to form clouds. When the water droplets in the clouds get heavy enough, they fall back to the surface as rain, snow, or other forms of precipitation. The average gap between the time a water molecule evaporates and it falls back to earth is about nine days.

The rain that falls on land runs off into rivers and streams, or soaks into the ground. Eventually, most of it makes its way back to the oceans.

Since the oceans contain about 97 percent of Earth’s surface water, they make the biggest contribution to evaporation. Most of that water rains back into the oceans -- only about 10 percent of it falls on the land. But that’s still a huge amount of water.

Of course, the rain doesn’t come down evenly. In some years, some regions get little or no precipitation at all, while others get hundreds of inches. In fact, the record is more than 900 inches -- more than 75 feet. But no matter where the rain falls, or how much of it there is, there’s a chance that it comes from the oceans -- continuing the never-ending cycle of water.