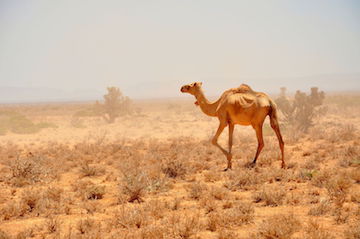 We all know that El Niño can have a big impact on the weather here in the United States. But El Niño’s effects aren’t limited to the U.S. They can alter the climate across the entire planet. In fact, an especially powerful El Niño may have triggered the deadliest famine in history.

The famine lasted from 1876 to ’78. It probably killed more than 50 million people. Most of the victims were in China, but there were many in Brazil, India, and parts of Africa as well.

Records of ocean temperatures showed that those years coincided with an especially strong El Niño -- when the warm surface waters in the Pacific Ocean can influence global climate. It lasted longer than any other El Niño ever recorded.

The researchers also found that the water was unusually warm in parts of the Atlantic and Indian oceans as well. That could have been a result of El Niño, or it could have been just a coincidence. Either way, that helped create severe droughts across much of the world. And that helped cause the famine -- a human catastrophe that began in the world’s oceans.