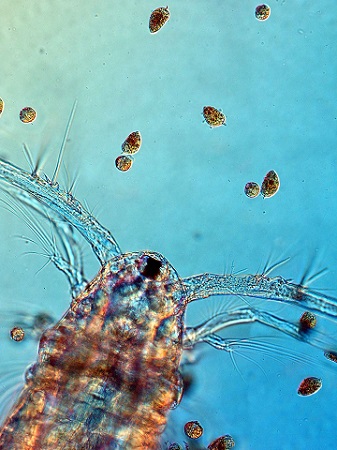 A copepod together with two types of dinoflagellates, one of which is a toxic species that produces paralytic shellfish toxins when it smells the copepod. Credit: Erik Selander, University of Gothenburg.

Just because something is tiny doesn’t mean it’s defenseless. Some of the smallest organisms in the oceans, for example, have found ways to keep much larger organisms from gobbling them up.

Researchers have studied how some types of algae and other organisms protect themselves from predators known as copepods. These are tiny shrimp-like creatures that are common in the top layers of the oceans. C

opepods emit chemicals as they swim along. To other organisms, the chemicals are like a bad case of body odor. They trigger different reactions, depending on the species. And all of them help keep the potential prey from getting eaten.

Some prey organisms, for example, produce toxins. That’s a danger to the copepods, as well as to other forms of life -- sometimes including people. So the copepods keep away.

Other organisms change the way they glow. When a copepod touches them, they produce a bright flash of light. In the lab, the copepods dart away at high speed -- like burglars being scared off by an alarm.

And some species of algae survive by making themselves smaller. These species produce chains of cells -- sometimes 20 or more. The chains are easy targets for copepods. In lab tests, though, algae exposed to the copepod “smell” split into smaller chains, or even individual cells. That cut the amount of those species consumed by copepods by up to 90 percent. So some of the smallest organisms in the oceans may survive by getting even smaller.