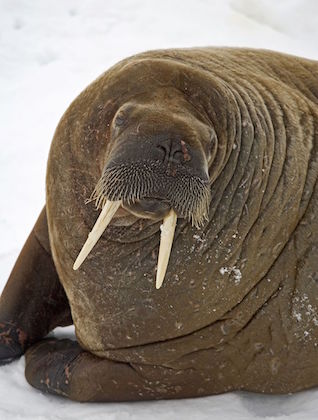 On the ice, the Atlantic walrus is slow and lumbering. In the water, though, it’s graceful, maneuvering with ease. Until recently, though, it wasn’t thought to be an especially deep swimmer. But a recent study found that the walrus can reach depths of a third of a mile.

The Atlantic walrus lives mainly in the cold waters around Greenland and Canada. There could be as many as 25,000 of them, living in several groups.

The walrus’s most prominent feature is its tusks. They’re used for defense, to cut through ice, and to help pull the walrus out of the water.

The animals feed on the ocean floor. They use their sensitive whiskers to detect food -- mainly shellfish. They especially like mussels and clams. They dig them out of the muck on the bottom, then hold the goodies with their front flippers. The walrus then puts the edge of the shell up to its mouth and, in just a few seconds, it sucks out the tasty critter inside.

Walruses usually find their food in waters that are no more than a few hundred feet deep. Because of that, no one expected them to dive very far.

But from 2010 to 2013, researchers followed a group of almost two dozen Atlantic walruses, using satellite trackers attached to their backs. The scientists found that in the deep water between Greenland and Canada, two members of the group descended to more than 1600 feet. But the scientists aren’t sure why the walruses went so deep. They didn’t need to go that far to find food, so there may be another reason for the walruses to go deep.