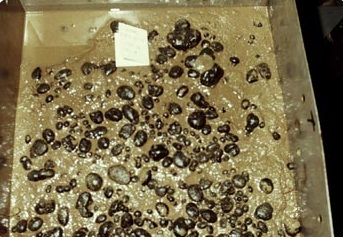 Trillions of metallic nodules cover the bottom of a vast region of the Pacific Ocean. They’re worth a fortune, so mining operations are considering scooping them up. But like many things, the idea is complicated. The nodules are the key to survival for many species of life. So taking the nodules away could cause massive loss of marine habitat.

The nodules are found in the Clarion-Clipperton Zone. It covers 1.7 million square miles, between Mexico and Hawaii. The nodules are up to the size of a potato. In all, they may contain billions of tons of manganese, nickel, copper, and cobalt. They also contain rare earth elements, which are used in batteries for electric cars and for wind- and solar-power stations. Demand for these elements has made it more economical to consider pulling the nodules from depths of up to 18,000 feet.

But several expeditions in recent years have found an amazing abundance of life in the zone, including many species that had never been seen before. Most of the ocean floor in the zone is covered with mud. But many organisms anchor themselves to the nodules and let the currents bring them food.

Mining operations would suck up everything on the sea floor, keep the nodules, then dump the remainder back in the ocean -- destroying vast habitats.

The international group that controls access to the Clarion-Clipperton Zone is working on regulations for mining the nodules. They’re expected to be completed by the end of 2020.