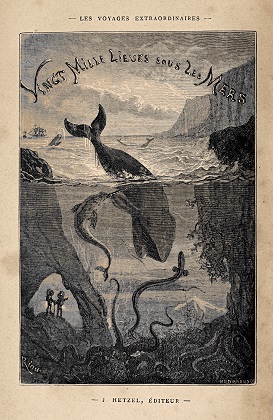 Cover artwork of the 1871 version of 20,000 Leagues Under the Sea. Credit: Public Domain

In June of 1870, readers in France were treated to the conclusion of one of the most exciting adventure stories of the century. It was the end of an underwater odyssey – the travels of Captain Nemo and his guests aboard the submarine Nautilus. It’s an adventure that’s been inspiring marine scientists, engineers, and others ever since.

“Twenty Thousand Leagues Under the Sea” was written by Jules Verne, one of the first authors of modern science fiction. He wrote about journeys around Earth, to the center of Earth, and to the Moon. And beginning in March 1869, he wrote about traveling under the sea. The story was published in installments, so it took more than a year for readers to get the whole thing.

Verne’s tale was inspired by the science and engineering of the day. He’d seen a model submarine at an exposition in 1867, for example. And Nautilus was named for an earlier sub.

“Twenty Thousand Leagues” told the tale of Captain Nemo, a mysterious character who attacked ships of all nations. He took aboard three men who were part of an expedition sent to track him down. They joined him on many adventures – to coral reefs, sunken ships, and the lost city of Atlantis.

The story was published in book form in 1871. A good English version didn’t appear until the 20th century. But it’s been in print ever since.

The title, by the way, refers not to how deep the Nautilus went, but to how far it traveled under the water – about 50,000 miles – an adventure that began 150 years ago.