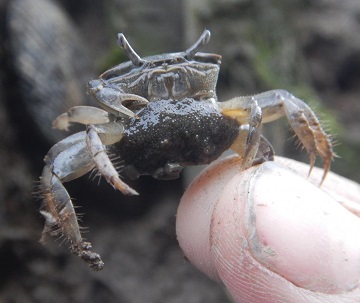 Fiddler crabs carry their eggs outside their bodies, so the eggs are exposed to chemicals in the environment. Credit: A. Buselco-McKim

Polycyclic aromatic hydrocarbons -- PAHs -- are compounds that can be both good and bad. On the good side, they form the “bark” on a slice of brisket, which adds flavor. On the bad side, they can cause cancer, so it’s best to avoid them.

PAHs are among the compounds found in crude oil. When oil spills into the ocean, some of it settles to the bottom. Many of the compounds in the oil can remain in the sediments for years. None of those compounds is good for marine life. And PAHs are especially bad.

A recent study found that juvenile fiddler crabs are among the organisms at risk from them. Researchers placed adult crabs that were ready to reproduce in tanks. The sediments at the bottom of the tanks contained PAHs, at levels that might be seen a few years after an oil spill.

Female crabs carry their eggs outside their bodies. So as the crabs burrow, their eggs are exposed to whatever chemicals are mixed with the sediments.

When the eggs hatch, the juveniles spend most of their time near the surface, where they’re exposed to sunlight. And the ultraviolet rays in the sunlight can cause a toxic reaction.

The study found that adult crabs didn’t seem to be harmed by the combination of PAHs and sunlight. And neither did juveniles that weren’t exposed to the light. But most of the juveniles that did see strong daylight died -- victims of a toxic combination.