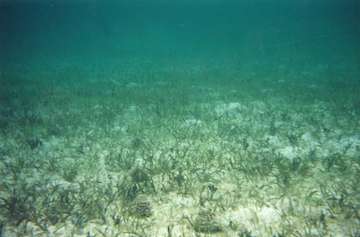 As a result of Hurricane Harvey in 2017, many seagrass beds were destroyed, threatening the shelter and breeding grounds for many ocean species. Photo Credit: Public Domain

When Hurricane Harvey hit Texas in 2017, it killed almost 70 people and inflicted more than a hundred billion dollars’ worth of damage.

Not all of the damage was visible, though. Some of it was on the bottom of the lagoons along the coast. Harvey ripped up seagrass beds, which provide shelter and breeding grounds for many species of fish and shellfish, and hunting grounds for birds and other critters. That could change the complexion of those regions for years.

Researchers from the University of Texas Marine Science Institute looked at the lagoons before and after the hurricane. They’d surveyed 126 spots in July and August, then went back to them in September and October.

They measured how much of a lagoon was covered by the region’s most common seagrasses, known as turtlegrass and shoalgrass. They also measured the sizes of the blades of grass.

Shoalgrass is small, grows quickly, and typically is the first species to colonize an area. Turtlegrass is larger and grows more slowly, but it can replace shoalgrass.

Where the wind was strongest, Harvey did far more damage to turtlegrass beds. It wiped out larger areas, and the surviving plants were more severely damaged.

In part, that may be because shoalgrass beds were in more sheltered areas. In beds with both species, turtlegrass may have protected shoalgrass. Whatever the reason, the effects could be long lasting. Turtlegrass grows and reproduces slowly, so it’ll take it longer to recover -- altering the ecosystem of these damaged areas.