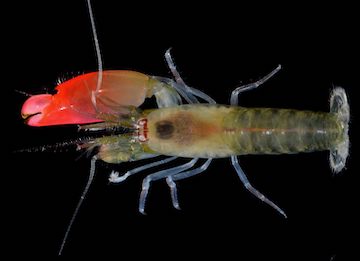 The pistol shrimp can use its claw to produce a loud sound that can stun its prey. Photo Credit: Oxford University Museum of Natural History/ Creative Commons Attribution 3.0 Unported

The pistol shrimp has terrible eyesight. But some species of the shrimp get help -- not spectacles, but a companion fish: a goby. It keeps an eye out for predators. In turn, the shrimp maintains a burrow that’s used by both of them.

The pistol shrimp gets its name from one of its claws, which is larger than the other. It snaps the claw shut quickly, generating bubbles. When the bubbles collapse, they produce a loud sound -- like a gunshot. That can stun prey, and allow the shrimp to communicate with other shrimp around it.

The problem for the pistol shrimp is that it can’t see predators coming. So it teams up with the goby -- a small fish with an elongated body. The shrimp digs a burrow in the sand and keeps the burrow clean. During the day, it comes out of the burrow to find food.

And that’s where the goby comes in. It has excellent vision, so it acts as a lookout. It stays close to the burrow, where the shrimp can touch it with one or both of its antennae. If the fish sees danger, it can wiggle its fins or body to warn the shrimp, or dart into the burrow. Alerted to the threat, the shrimp ducks into the burrow, too. And at night, both creatures stay inside the burrow, which the shrimp may barricade with bits of coral or other debris.

Biologists aren’t sure just who initiates the partnership. But they do know that shrimp and gobies may form a team when both are juveniles, then stay together into adulthood -- a long-lasting partnership that helps keep both of them safe.