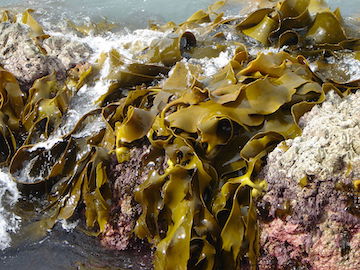 The discovery of Bull kelp on the beaches of Antartica worries scientists as it is believed more organisms could wash up on shore and threaten the ecosystem. Photo credit: Erasmo Macaya/ Creative Commons Attribution-Share Alike 3.0 Unported

A few strands of kelp washing up on a beach usually isn’t much cause for alarm. But when two clumps of southern bull kelp were found in Antarctica in early 2017, scientists were concerned. While the kelp didn’t constitute a full-scale invasion, it did suggest that invaders might be a bigger threat in the years ahead.

Antarctica is well isolated from the rest of the world. Strong winds and currents in the surrounding ocean tend to keep creatures from other lands away. In fact, scientists had thought the Southern Ocean was like a steel curtain, keeping Antarctic shores untouched.

The discovery of the bull kelp proved otherwise. Genetic analysis showed that the clumps had come from islands in the southern Atlantic and Indian oceans, thousands of miles away. But scientists couldn’t figure out how the plants made the trek.

One team produced new models of how water circulates in the Southern Ocean. In particular, they incorporated the waves generated by giant storms, which can be several stories tall. The models showed that the waves could push stuff toward Antarctica instead of away from it. And they indicated that the clumps of kelp had traveled more than 12,000 miles as they circled the continent.

The scientists concluded that alien organisms must wash up on shore more often than thought, and are killed off by the harsh climate. As the climate gets warmer, though, it might be easier for invaders to take hold -- perhaps threatening the delicate ecosystem at the bottom of the world.