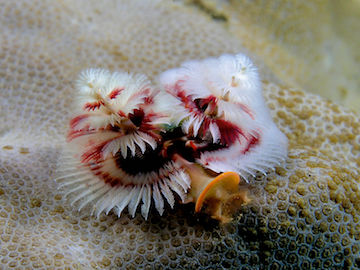 The Christmas Tree worm can grow to be an inch and and half long and can live up to 40 years. Credit: Nick Hobgood/ Creative Commons Attribution-Share Alike 3.0 Unported

There aren’t many worms that you could truthfully describe as “beautiful.” One of the few is found in the most colorful environments on Earth: coral reefs. It’s known as the Christmas tree worm because it looks like a colorful little fir tree. And it comes in an amazing variety of hues: red, blue, purple, yellow, and many others.

The Christmas tree is a polychaete -- a worm that’s made of several segments. A young worm settles on a coral and then stays put for the rest of its life, which could be as long as 40 years. It burrows into the coral, then lines the tube with calcium carbonate, creating a cozy home.

The worm’s body is only about an inch to an inch and a half long. But it has two brightly colored “crowns” that extend outside the burrow. Each spiral-shaped crown consists of wispy, hair-like structures that give the worm its Christmas-tree appearance. They serve double duty. They nab tiny plant-like organisms from the water and funnel them down to the worm’s stomach. They also serve as “gills,” pulling oxygen from the water.

When the worm is startled, it quickly pulls the crowns down into its burrow, then slams a door behind them. The door is covered with spikes to protect the worm from predators.

Christmas tree worms are more than just beautiful decorations, though. They can protect their coral homes from bleaching. And they’ve been observed to push away the sucker feet of crown-of-thorns sea stars that eat the living coral -- a jolly little present from a beautiful worm.