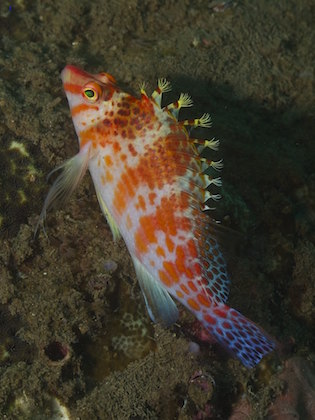 The Dwarf hawkfish and the Clownfish are just two of many type of fish that can change sex. Photo Credit: Elias Levy/ Attribution 2.0 Generic

The colorful dwarf hawkfish has a colorful life story. Found on coral reefs from Australia to Japan, it lives in harems -- one large male with an entourage of several females. If the male gets greedy, though, things can change. One of the females can become a male and take half of the harem. And researchers recently found that if the new male is challenged by another male, he can change back to a female.

The hawkfish isn’t the only fish that can change sex. In fact, it’s a fairly common trait, especially among fish that live on reefs.

Other species of fish start out female then become male. And others don’t become either until they meet potential mates.

And in some fish, the change is influenced by the environment. The ratio of males to females in southern flounder, for example, varies with the temperature. When young juveniles in the lab were exposed to lower temperatures, the sex ratio was about even. But as it got warmer, the percentage of males increased. That difference wasn’t seen when the temperature difference was applied to slightly older juveniles, though -- suggesting that timing and temperature played a role in defining a fish’s gender.