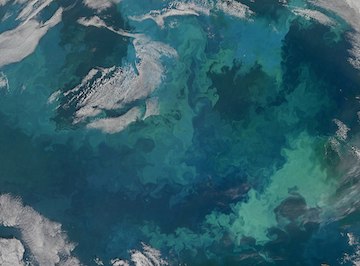 The blue-green swirls in the photo are actually millions of tiny phytoplankton floating in the sea. Photo Credit: NASA/ Creative Commons Attribution 2.0 Generic

If you like the deep blues and rich blue-greens of the oceans, then you might really enjoy the view at the end of the century. A recent study says the blues could be bluer and the greens greener. While that might be aesthetically pleasing, it's not a good thing for life.

A couple of factors determine ocean color: the water itself, and the stuff it contains. Water molecules absorb redder wavelengths of light and reflect bluer wavelengths, making water look blue.

But that color is altered by the stuff in the water. Tiny plant-like organisms known as phytoplankton, for example, add a greenish tint. That's because they contain chlorophyll -- the compound that gives plants on land their green color. So the more phytoplankton, the greener the water.

Researchers created a model of how ocean colors might change through the end of the century. The model included changes in temperature, chemistry, and other factors.