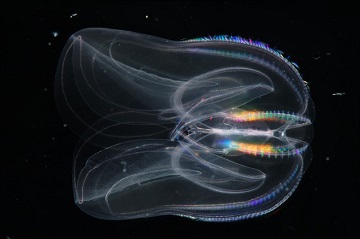 The sea walnut first entered the Baltic Sea almost 40 years ago, probably hitchhiking on cargo ships. Since then, this little critter has been a big pest. The population has exploded as the organisms have gobbled up young fish and crustaceans. And to sustain themselves during the winter, they may eat their own young.

The sea walnut is a type of comb jelly. It’s typically a few inches long, and its transparent body is shaped like the meat of a walnut. Its native habitat is the northern Atlantic Ocean, along the coast of North America. But over recent decades it’s invaded other waters -- especially the Baltic Sea, between Europe and Asia.

In late summer, sea walnuts in the Baltic expend a lot of energy reproducing. And that’s been a mystery. Winter in the Baltic is cold and dark, so there’s almost no chance that youngsters would survive it.

But a recent study found that the young might be intended more as a food supply than as a next generation. Researchers found sea walnut larvae in the stomachs of the adults in late summer and early autumn. And they found that adults in the lab also ate their offspring.

The researchers suggest that the adults need to eat their young to survive the winters. They’re farther north than in their native waters, so they need to store more food for the season. And they eat all the other available food by late summer. Eating their young could add several weeks of energy to their stores -- perhaps enough to sustain them through the long, hungry winter.