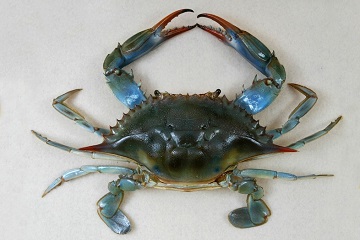 Blue crabs are among the most popular seafood items in the country. Tens of millions of them are harvested from bays and estuaries every year. They account for thousands of jobs and hundreds of millions of dollars in sales -- all for a little critter that’s more legs and shell than meat.

Blue crabs are found along the Atlantic and Gulf coasts. They’re most common in Chesapeake Bay, where a 2020 census found more than 400 million of them. That was down from the year before, but well within the range needed to keep the population healthy.

Males grow up to about nine inches across, and weigh about a pound. Females are a bit smaller. And the crabs will eat just about anything: oysters, mussels, fish, dead fish, plants, animal wastes, and even each other.

A female may molt about 20 times, losing her protective shell and growing a new one each time. And during the final molt, it’s time for motherhood. She mates with a male, who protects her from other males until her new shell is in place. Then she’s ready to produce several broods, with a couple of million eggs in each one. She swims to the mouth of the bay or estuary and releases the newly hatched young into the open ocean.

The young crabs stay in the ocean for a month or two. Then they return to the coast to settle down, grow, and reproduce. But not many of them make it. Most of the young crabs get eaten by other creatures. From a brood of millions, only a few may survive to adulthood -- and a possible date with a crab pot.