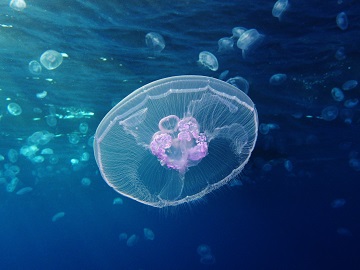 Researchers have given pacemakers to moon jellyfish. That makes the jellyfish swim faster. And in the future, similar devices may allow scientists to control the jellyfish -- turning them into deep-sea explorers.

For the jellyfish experiment, scientists placed a tiny probe in the bells of moon jellyfish. These creatures are found in oceans all over the world, from the tropics to much colder regions. They’re big -- the size of a dinnerplate or bigger. And you can see right through them.

The probe that scientists used in the jellyfish experiment was less than an inch long. But the tiny package contained a battery and a computer processor. Electrodes from the probe were implanted in the muscles that propel the jellyfish. Those muscles collapse the bell -- the round “body” of the jellyfish -- causing it to shoot out water. That pushes the jellyfish in the opposite direction.

The probes controlled those muscle contractions. The researchers were able to make the jellyfish swim almost three times faster than average. And the experiments showed there was no extra stress on the bodies of the jellyfish.

The researchers plan to work on ways to control the direction the jellyfish swim. And they’re looking at attaching tiny sensor packages to measure water temperature, salinity, oxygen levels, and more. Attaching the instruments to many jellyfish could allow scientists to study parts of the oceans that are poorly understood -- especially the deep ocean -- thanks to “bionic” jellyfish.