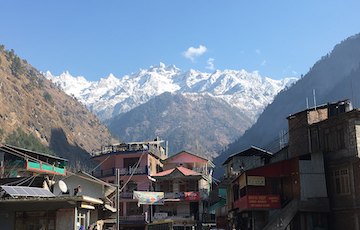 The Himalayan mountains climb miles high, forming a towering fence line across Asia. But they also plunge miles deep -- buried at the bottom of the Bay of Bengal, off the eastern coast of India.

The underwater portion of the Himalayas forms the Bengal Fan -- a roughly cone-shaped bed of sediments that extends far into the Indian Ocean. It’s about 2,000 miles long, 600 miles wide, and up to 10 miles thick. It’s the largest submarine fan in the world.

The Himalayas began forming about 40 million to 50 million years ago, when two of the plates that form Earth’s crust began smashing together. The boundary region was pushed upward, making the mountains -- a process that continues today.

As the mountains formed, rains began eroding them away. The bits of rock traveled to the Bay of Bengal through rivers and streams. Once in the bay, they traveled far out to sea through underwater canyons.

Researchers have found that the amount of sediments took a major jump about 23 million years ago. That may be when the Indian monsoon season developed. The extra rainfall increased the rate of erosion, so more of the mountains were drained away into the ocean. Today, the Ganges and Brahmaputra rivers dump about a billion tons of Himalayan sediments into the Bay of Bengal every year.

All of that sediment isn’t necessarily very stable, though. A recent study said that big underwater landslides in the Bengal Fan could cause major tsunamis -- ocean disasters triggered by the world’s tallest mountains.