Back From the Edge 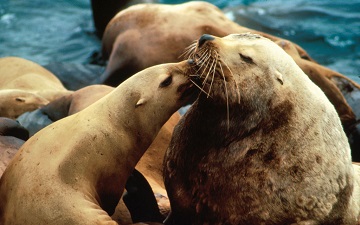 The Steller sea lion was removed from the endangered species list in 2013. Credit: NOAA

The Steller sea lion used to be a common sight along the Pacific coast, from Alaska to California. But for some reason, the sea lion’s population plunged. So in 1990, the sea lion was placed on the endangered species list, which gave it legal protections. Thanks to conservation efforts, the species in the eastern half of its range recovered. And in 2013, the eastern Steller sea lion was removed from the endangered list.

Over the decades, more than 700 species of plants and animals have been added to the endangered species list. Only about 30 have been taken off the list because they recovered.

The marine species that have been removed from the list include the brown pelican in Florida and Alabama, several groups of humpback whales, and one group of gray whales.

Other species have been removed from the list because they shouldn’t have been put there in the first place. A seagrass in Florida was dropped because it turned out to belong to a species that was healthy and widely spread.

But some species aren’t so lucky. The Caribbean monk seal was removed from the list in 2008—after it became extinct.