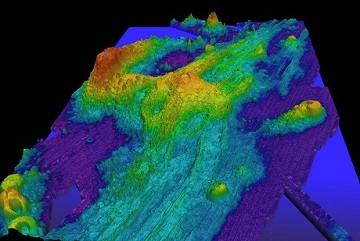 Map of the sea floor at the Axial Seamount. The large, prominent caldera is on the fault between the Juan de Fuca Plate and the Pacific Plate. Credit: NOAA.

The busiest volcano in the Pacific Northwest isn’t Mount Rainier, Mount Hood, or even Mount St. Helens. Instead, it’s a peak that’s 300 miles off the Oregon coast, almost a mile beneath the surface of the Pacific Ocean.

Axial Seamount belongs to a chain of submarine volcanoes that stretches from Oregon to near Alaska. They’ve built up along the boundaries between slabs of Earth’s crust. Axial, for example, is on the fault between the Juan de Fuca Plate and the Pacific Plate. Magma pushes up along the boundary, building underwater volcanoes.

Axial Seamount has erupted three times in the past quarter of a century. The most recent came in 2015. Geologists predict it will erupt again by 2024.

The volcano’s crater is shaped like a loaf of bread, with a breach at its southern end. The crater floor is covered with hydrothermal vents -- “chimneys” that belch mineral-rich hot water from below the ocean floor.

Axial Seamount was discovered by satellites, in the late 1970s. Scientists placed instruments around the mountain in the late ’90s -- just in time to record an eruption. And by the 2015 eruption, they’d built a network of instruments that transmitted readings in real time. That gave geologists their first-ever live view of an underwater eruption.

Today, instruments take pictures, monitor earthquakes, analyze the water, and more. And some new instruments will join the array in 2020 -- new “eyes” on a busy volcano.