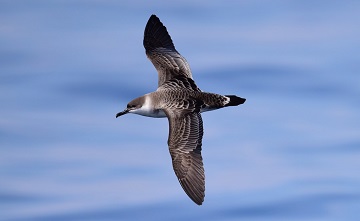 The North Atlantic Ocean is home to a rich diversity of seabirds, such as shearwaters. Credit: Ian N. White, CC BY-NC-SA 2.0.

The birds inhabit a region that’s almost as big as Texas. It’s south of Greenland, from near the shore of Canada to the middle of the Atlantic.

The first hints that it was a popular spot for birds popped up in 2016. A team of researchers looked at several earlier studies that tracked bird migrations. The studies showed that many of the birds settled in the North Atlantic for periods of days to months. Later studies found even more birds putting down stakes there.

In all, the studies recorded 21 species of birds. And as many as five million birds could settle there every year. Some travel a long way to get there: Some shearwaters come thousands of miles—all the way from the South Atlantic.

The birds may pick that spot because it’s where the warm water of the Gulf Stream intersects with colder waters. That region could provide good conditions for the fish and other organisms the birds eat.

Even though the region is far from land, the birds still face dangers—from fishing fleets, pollution, climate change, and other sources. So scientists are trying to get some international protection. But that won’t be easy to do—so the region could see fewer birds in the decades ahead.